Smoking harms nearly every organ in the body, and 6 million people worldwide die annually from tobacco use. This page provides links to death rates around the world, health consequences of smoking, and information on specific conditions caused by tobacco use such as lung cancer and cardiovascular disease.

Doll and Hill’s: Smoking and Carcinoma of the Lung

This historic article by Richard Doll and Bradford Hill first linked smoking and lung cancer in 1950.

Tobacco Use and Pregnancy

CDC provides information on the effects of smoking during pregnancy.

The American Cancer Society provides information on tobacco use and its harmful health effects.

This World Health Organization graphic illustrates some of the harmful effects of tobacco use on the body. Certain populations smoke at higher rates than the general population. This chapter of The Tobacco Atlas explores tobacco comorbidities among special populations, including individuals who excessively use alcohol, have a mental illness or other diseases, such as TB or HIV/AIDS.

The Tobacco Atlas provides an interactive map shows the prevalence of male and female deaths due to tobacco use by country. Use the “Filter by” function near the map to switch between male and female data. This link also provides general information about the death toll of tobacco and disparities in tobacco-related deaths.

WHO report on the global tobacco epidemic, 2013

The fourth in the series, the 2013 report presents the status of the MPOWER measures, with country-specific data updated and aggregated through 2012. In addition, the report provides a special focus on legislation to ban tobacco advertising, promotion and sponsorship (TAPS) in WHO Member States and an in-depth analyses of TAPS bans were performed, allowing for a more detailed understanding of progress and future challenges in this area.

The Tobacco Atlas provides an interactive map that shows the prevalence of female deaths due to tobacco use by country.

The Tobacco Atlas provides an interactive map that shows the prevalence of male deaths due to tobacco use by country.

HINTS is a national survey uniquely dedicated to learning how people find, use, and understand health information. The tobacco module includes such topics as e-cigarettes, FDA regulation, harm reduction, and smoking cessation.

The Health Consequences of Smoking—50 Years of Progress: A Report of the Surgeon General, 2014

Fifty years after the release of the first Surgeon General’s report warning of the health hazards of smoking, we have learned how to end the tobacco epidemic. Over the past five decades, scientists, researchers and policy makers have determined what works, and what steps must be taken if we truly want to bring to a close one of our nation’s most tragic battles—one that has killed ten times the number of Americans who died in all of our nation’s wars combined.Evidence in this new report shows tobacco’s continued, immense burden to our nation—and how essential ending the tobacco epidemic is to our work to increase the life expectancy and quality of life of all Americans.

Learn about the negative health effects caused by smoking and smokeless tobacco from this Medline Plus webpage created by the National Institutes of Health.

This report discusses the harmful effects of tobacco use, risks associated with pregnancy and adolescents, as well as best practices for the prevention and treatment of tobacco addiction.

This 2010 report of the Surgeon General is a comprehensive, scientific discussion of how mainstream secondhand smoke exposures damage the human body.

This 2004 report of the Surgeon General on the health effects of smoking returns to the topic of active smoking and disease, the focus of the first Surgeon General’s report published in 1964. 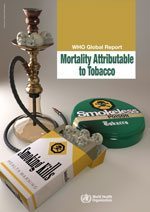