Marketing and advertising is a key tactic used by the tobacco industry to gain new customers and maintain brand loyalty. The marketing section will provide links that discuss the role of advertising and media as it relates to tobacco, statistics on industry spending, as well as guidelines for marketing limitations. Actual tobacco advertisements and campaigns can be found at links in the Advertisement Collection subheading. The Undue Influence subheading includes resources with information on how the tobacco industry influences politics, public opinion, and industry image.

Stanford Research into the Impact of Tobacco Advertising

SRITA is a Stanford research group which analyzes the effects of tobacco advertising, marketing, and promotion. Participants in this interdisciplinary program include faculty and students from several Stanford School of Medicine departments as well as the departments of History and Anthropology.

This tobacco ad gallery is searchable by country, company, brand or type of advertisement.

The Pollay Ad collection is an extremely comprehensive, searchable and user-friendly collection of tobacco advertising materials used by tobacco companies throughout the years.

The Way We Were: Tobacco Ads Through the Years

Roswell Park has acquired and scanned the document collections of the Tobacco Institute and Council for Tobacco Research and houses the Pollay tobacco ad collection, Phillip Morris ad collection, tobacco videos, and a youth marketing collection.

This report issued by the Campaign for Tobacco-Free Kids and other international public health organizations exposes how Philip Morris International’s (PMI) ‘Be Marlboro’ marketing campaign uses themes and images that appeal to youth across the globe. The campaign has expanded to more than 50 countries despite being banned by a German court for targeting teens and generating similar complaints in other countries.

The Marketing of Electronic Cigarettes in the UK

This 2013 Cancer Research UK report studies the current and likely future trends of e-cigarette marketing in the United Kingdom including an audit of all forms of e-cigarette marketing, as well as the related public relations and editorial comment in tobacco industry and retail trade press. Traditional and digital / social networking outlets were included along with in-depth interviews with marketing experts.

Framework Convention on Tobacco Control Guidelines for Implementation of Article 13

WHO FCTC guidelines on tobacco advertising, promotion and sponsorship.

This 2012 FTC report is the latest in a series on cigarette sales, advertising, and promotion.

This 2012 FTC report is the latest in a series on smokeless tobacco sales, advertising, and promotion.

National Cancer Institute: The Role of the Media In Promoting and Reducing Tobacco Use

This 2008 National Cancer Institute monograph summarizes what we have learned about the ability of the media to encourage and discourage tobacco use.

How Do You Sell Death?

This publication, developed by the American Cancer Society, the Campaign for Tobacco-Free Kids and the Framework Convention Alliance, highlights the manipulative marketing tactics of the tobacco industry.

This Action on Smoking and Health paper argues that tobacco is a highly unusual special case that poses very serius health implications and this justifies interventions to control the marketing of the product.

Artifacts of the Epidemic: The Trinkets and Trash Collection

Professor Richard Pollay’s last two decades of scholarship focused heavily on tobacco marketing. Some of the most requested papers are available for download on this page.

Tobacco Commons is a place where recent tobacco marketing blurbs, pictures and observations made by common people on the internet are collected. Most of the images and quotations are taken from blogs and personal websites.

Tobacco Product Marketing on the Internet

Deadly in Pink: Big Tobacco Steps Up Its Targeting of Women and Girls

This 2009 report describes the tobacco industry’s new marketing campaigns, the industry’s history of targeting women and girls, the devastating consequences for women’s health and the benefits of legislation to grant the FDA authority over tobacco products.

This website is a project of tobacco control expert, Stanton A. Glatz, PhD. It provides information on smoking in movies as a form of marketing for Big Tobacco and the effects on youth smoking.

This report from the Campaign for Tobacco-Free Kids, American Heart Association, American Lung Association, and ACS-CAN discusses product design and marketing tactics used by the tobacco industry to attract and retain customers.

The Campaign for Tobacco-Free Kids has compiled numerous fact sheets about tobacco industry activities. Topics include marketing practices to youth and special populations, racketeering, and other tobacco industry bad acts.

The Campaign for Tobacco-Free Kids has compiled numerous fact sheets about FDA regulation of tobacco products. 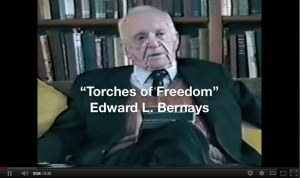 Edward Bernays worked as a publicist for the American Tobacco Company and lead the movement of marketing cigarettes to women as “torches of freedom”.

Smoke-Free Movies: From Evidence to Action

This WHO report examines the well-financed and deliberate efforts that tobacco companies have put forth to undermine efforts at tobacco control.

Open Secrets reports the total contributions to federal candidates and political committees from the tobacco industry, which includes makers of cigarettes, cigars and smokeless tobacco, as well as their trade groups.

Frequently updated comprehensive bibliography of publications and resources that utilize and analyze tobacco industry documents from 1994 to present. This section of the bibliography is specifically devoted to politics and policy.

The Campaign for Tobacco-Free Kids has compiled numerous fact sheets about tobacco industry activities. Topics include marketing practices to youth and special populations, racketeering, and other tobacco industry bad acts.

The Frank Statement was a historic ad run by the major American tobacco companies in 1954 that marked the beginning of a long legacy of misinformation about the health effects of smoking.