This page links to resources for tobacco-related news and current events. The video section includes links directly to specific videos as well as collections of videos about topics such as government hearings, anti-tobacco campaigns, and advertising.

Online resource center for tobacco control news. Tobacco.org searches for tobacco-related news coverage from throughout the United States and around the world, and updates the website daily.

Legacy for Health as created a number of animated infographics describing various aspects of the tobacco issue including the hidden costs of smoking, poverty, smoking in movies, and the death toll of smoking.

The Way We Were: Tobacco Ads Through the Years

Podcast presentation based on research in UCSF’s Legacy Tobacco Documents Library about the industry’s marketing, advertising, manufacturing, scientific research about and sales of tobacco products as well as their political activities.

This website is a repository for tobacco advertisements and tobacco media.

This FDA website documents the most current news and events.

The Seven Dwarves: “I Believe That Smoking is Not Addictive” 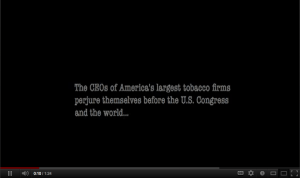 In this video, the CEOs of the seven largest tobacco manufacturers in the U.S. go on record before congress that they do not believe that nicotine is addictive. 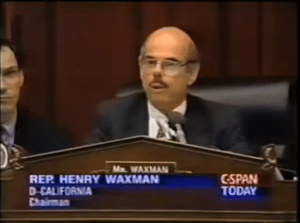 Representative Henry Waxman questions the CEOs of the major U.S. tobacco manufacturers about the health effects of smoking.

In this video, Legacy for Health uses other forms of littering to highlight the atrocity of cigarette butt pollution. The Way Things Were

Over the past 50 years, the social acceptability of smoking has declined significantly; this is a keystone accomplishment of the tobacco control movement. This video explores the importance of social norm change as a primary strategy for improving public health by reducing smoking rates.

These short videos provide an introduction to tobacco use in Africa, some of the successes in addressing the devastating effects of tobacco use, and the challenges to progress, including tobacco industry influence. These videos were made in conjunction with the African Tobacco Situation Analysis Project (ATSA), an initiative supported by IDRC in partnership with the Bill & Melinda Gates Foundation.

How Much is a Life Worth? The Truth About Tobacco

This annual event, taking place on the third Thursday of November, encourages smokers to use the date of the observance to make their plan to quit smoking for good or to plan in advance and quit smoking that day.

Edward Bernays worked as a publicist for the American Tobacco Company and lead the movement of marketing cigarettes to women as “torches of freedom”.